I’m literally in class right now, writing this on my cell phone. I probably should be listening to Mr. Herman’s lecture — we’re learning about fall of the Roman Empire today — but I can hear Maisie and Bella whispering about Maddie behind me and I just c a n t deal with that right now. So like sorry Mr. Herman but this is where we are today.

Within hours of my visiting Father Keeler on Wednesday, a letter arrived at the Sexton household, apparently from Madelyn. I haven’t actually seen it, but within twelve hours of its arrival pretty much everyone in Black Lake knew more or less what it said.

According to Maddie’s little sister Carmen, the letter basically confirmed everything the cops thought. She ran away. She was feeling the pressure of being Basil and Gloria Sexton’s first daughter, so she split. She didn’t want to apply for colleges. Needed to find herself. Apparently she’s in California sleeping on a beach or something. I don’t know.

Just thinking about it makes me want to fucking scream.

Our class is having an absolute field day. We haven’t had a real gossip since Sarah Holder got pregnant.

Reactions have been, for the most part, in three camps. Camp one is scandalized — the classic I can’t believe she’d do this kind of thinking. This comes in a number of flavors:

I can’t believe she’d do this … to her family, for example.

Or maybe, I can’t believe she’d do this … right before college.

Or for the especially vicious, I can’t believe she’d … be so selfish, which is, if you can imagine my personal favorite because I’m really dying for another excuse to get suspended.

The second camp are all weepers and they’re by far the most obnoxious. All these random people wailing about how they wish she’d talked to them about what she was feeling before running away as if they were all the most special person in Maddie’s life, as if she owed them special explanations because they were just such bosom friends. I walked by Susan Krissen and Dorothy Jacobson literally weeping in the hall earlier. Like bitch she didn’t tell me. There’s no way she was telling your dumb asses.

The third camp is my least favorite, the one most likely to drive me beyond rational thinking. These are the new Maddie admirers, who always thought she was just some shallow bouncy gay cheerleader until now, when the depths of her wisdom and pain are finally opening up to us.

Jack Kerouac wannabes spew this pretentious garbage about how much they underestimated her. Robert Plant enthusiasts congratulate her on her stance against The Man. Silvia Plath girls sigh a lot and loudly consider joining her. As if any of these boring, pretentious asshole’s opinions could ever mean a single damn thing to Maddie. Maddie doesn’t give a fuck about any of us. Maddie was always going to do exactly what she wanted, damn what any of us think, and damn whoever she hurts.

It’ll be a miracle if I make it home without fighting someone. 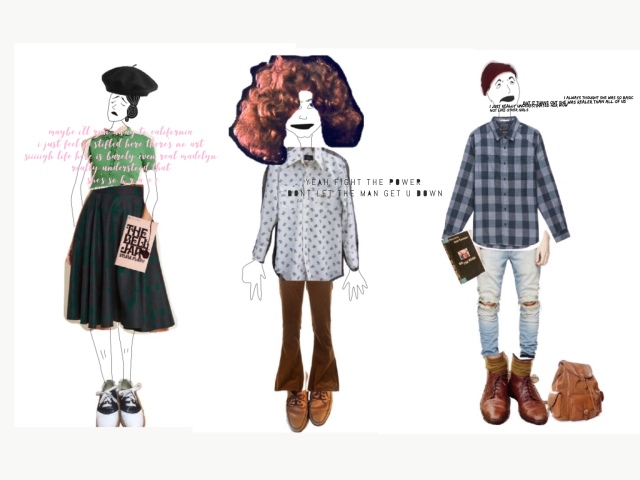 Carmen sent me a photo of the fucking letter.

She didn’t write that.

Maddie always signs off everything love, love, love because she’s a dramatic bitch and anything she means she says like a bunch of times.

Also, she’d never sign her name Maddie. She would have written Madelyn. She’s weirdly formal about her name.

And like the biggest give away ever — Madelyn would NEVER type and print any letter, much less a letter that important. It’s like Madelyn 101 — she loved writing letters, and by writing I do mean w r i t i n g. Like, with a pen.

I don’t know who wrote this letter and I don’t know where Mads is but she isn’t on a beach in California. Everyone else has taken a long sigh of relief, but everyone else is an idiot and I’m living in absolute terror.