I think Warren Miller is hitting on me. Three weeks ago this would have been like the news of the century but now I honestly don’t give a shit. He’s been, like, hunting me down at lunch to sit with me, and he’s being like… awkwardly nice to me?

Warren Miller is not a nice person. Warren Miller is the kind of person to light a bonfire in the middle of the track field. He spends most of his school days sharing joints with Keith Handell behind the dumpsters. I’ve never seen him go to any class that wasn’t Ms. Duke’s art class. He always sits in the back of her room with his headphones up so loud we can hear how chaotic his music taste is, and silently judges everyone’s art. I should know, I had art with him last year and once he saw the still life I was working on and said it was I dunno, sorta commercial.

Maddie says my crush on Warren Miller is a manifestation of predictable teenaged self-loathing. She is correct. I’ve had a fat crush on him for a year, and it’s totally because he keeps calling my art derivative.

He was sitting behind me today while we were supposed to be working on these huge self portraits. Instead I was drawing a milk carton with Maddie’s face on the side of it, 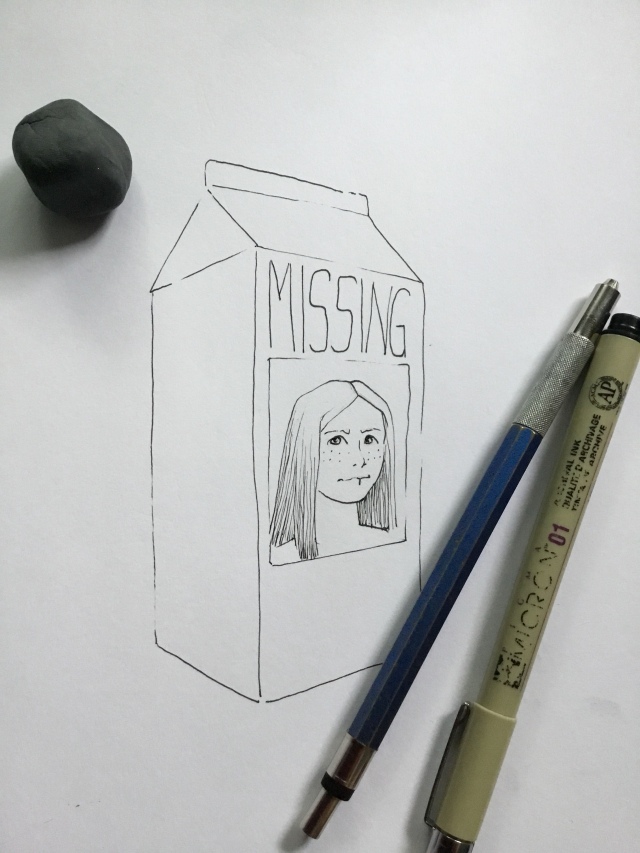 and I was like deep in the zone and feeling sorry for myself when I felt a presence at my shoulder and there was Warren Miller in his flannel and denim vest and fraying jeans and gigantic headphones and he said “I like it” and like weirdly elbowed me in the shoulder?

So I said “Fuck you,” because the drawing isn’t even good, it’s pathetic and indulgent and obvious, and if he hadn’t been feeling fucking sorry for me that’s exactly what he would have said.

I am so sick of everyone feeling sorry for me.

Anyways, I was still pissed off after school so I went back to the Circem Street house hoping that the Hawthornes would be there but they weren’t. There was no evidence of them being there except for a sessions bottle in the corner and some tape stuck to one of the walls. The corners of photos and newspaper cut outs were still stuck under the tape. I’m imagining a whole web of evidence about Madelyn’s case taped up there

but it’s gone now and the Hawthornes are also gone and I don’t know where to find them.

I feel like I’m the only person in this terrible town still looking for her. It hasn’t even been 3 weeks and barely anyone goes to the search parties anymore. Of course they don’t go. They all think she’s laying on a beach somewhere.