So our job — I say our, but I only mean it in the loosest sense because I’m pretty sure Neal really is going to make me sit in the hotel room the whole time — is in a city I can’t tell you about obviously because I can’t get caught but like I don’t feel like you’ll really understand what’s happening unless you know where I am, you know? Like this is one of those cities where the stuff that happens here can only really happen here.

A hint: lots of… rich people are here. Palm trees. Movies. Beaches. Brunch. Lol look if you haven’t figured out we’re in LA I don’t know what to tell you.

(I’m really counting on no one reading this hahahaha)

I’m literally writing this from a coffee shop in Hollywood. It’s wILD here. I feel like such a small town brat. It’s not really the way I imagined it, you know? Like I usually imagine cities to be like… tall? Everything is low to the ground and sprawling and there’s nowhere to park and it’s super sunny.

Neal and Julian are a few blocks up interviewing our… clients? Idk what to call them exactly but in this case client is a close enough descriptor.

Hahahaha I’m so excited I can barely type. Fam it’s VAMPIRES. As in Buffy the Vampire Slayer, straight up VAMPIRES.

K I’m over simplifying. Julian explained it this morning as we drove into town.

“What people call vampires is actually a number of different species of creature,” he said, navigating smoothly through the morning traffic. “The different species have varying levels of… I mean I hate to say intelligence, but that’s basically what I mean.”

“So what species are we dealing with today?” I asked, mouth full of drive-through breakfast burrito.

“This is a very old and established coven of highly respected vampires,” Julian said. “They aren’t killers, and they don’t turn anyone without permission, so they’ve been allowed to amass a great deal of wealth and power over the many years they’ve been here. We pretty much live and let live with this particular family — so long as they don’t hurt anyone.”

“Not that we’d be able to do much if they did start hurting people,” Neal said darkly.

“Apparently they’ve run into some issues with a recent turn,” Julian said.

“Did they go bad?” I asked. I might have been a little overeager. All my cool new hunter IDs miiight have gone to my head a little bit. “Have they been exsanguinating people? Are we going to have to hunt them down?”

Neal rolled his eyes. “Your enthusiasm doesn’t inspire much confidence in your hunting maturity.”

Julian laughed. “They didn’t go bad,” he said. “Apparently the new turns are triplets, and their human parents found them by accident, and now they all want to be reintroduced to each other. Trouble is, young vampires are notoriously unpredictable. Leopold wants us there to help negotiate with the girl’s former family. Make sure nothing gets out of hand. It should be an easy case.”

And now Neal and Julian meet with the Vampire coven to get a better idea of what they’re dealing with while I sit here in a coffee shop, blogging.

But Julian did suggest that depending on how things go I might get to meet the vamps tonight.

Ok, I’m on my way out the door, but I just want to update you really quickly.

The boys picked me up from the coffee shop after like an hour and brought me RIGHT TO THE VAMPIRES LAIR. Lol it was absolutely not dramatic at all. They live in this huge house in Beverly Hills, an airy, pillared white mansion. There was an enormous fountain in the entry way of the house. I’ve never seen a place like it it was insane. I felt like a mouse in a castle, but the Hawthornes have apparently been around or something because they greeted the housekeeper by name and seemed utterly unimpressed by the enormous chandelier hanging over our head.

We went downstairs. Apparently that whole situation with vampires and sunlight is the real deal because the vampires themselves were underground in the windowless basement. It was an enormous room. There were maybe ten of them, lounging around on pillows. One of them, a long pale creature, was smoking from a hookah. Another was painting a scroll.

The boys introduced me to the vampire seated almost at the center of the room, a tall, pale man in an ornate velvet bathrobe.

“Shiloh, this is Leopold Sara, head of this coven,” Julian said.

The man offered me a long, pale hand, and I took it. His skin was cold and dry.

He wasn’t like… inhumanly beautiful or anything, but there was definitely something inhuman about him. He was strangely still, and each of his movements seemed very deliberate. I even noticed when he blinked, because it seemed so intentional.

“You have the smell of death on you,” he said. He had a dry, whispery voice I didn’t particularly like. Or maybe I just didn’t like being told I smelled like death. “You’re the girl people have been whispering about.”

“Shiloh is under our care,” Julian said. His tone was measured and careful.

“She is young, like the triplets were young before we turned them,” Leopold said. He had just the memory of an accent, maybe European. “They are in the back room, would you care to join them?”

I glanced at Neal and he nodded me off towards one of the doors. It crossed my mind that maybe I didn’t want to go wandering off into the depths of a vampiric cavern, but I figured Neal and Julian are so annoyingly cautious the last thing I wanted to do was balk the moment they actually let me do anything. So I went in the direction they indicated, through an archway and down a short hall.

When I opened the door at the end of it, it was onto an utterly different scene.

It was like I’d walked off the set of Pride and Prejudice and into Paris Hilton’s bedroom circa 2003. Three tall, thin girls were sitting on the high, enormous bed. They all looked up at me at the exact same moment. They were identical. It was honestly terrifying.

And they all said, at the same time, like some kind of terrifying satanic choir: “are you here to feed us?”

To which I was like “NO, NOPE, LEOPOLD JUST SENT ME.” And they all sighed and leaned back across the bed, a tangle of long thin limbs.

“I’m always so hungry,” said another.

“I could eat this whole city,” said the third.

One of them said, “I’m Jess, and these are my sisters, Valentina and Caitlin.” She didn’t indicate which sister was which, but it didn’t matter because I couldn’t tell them apart anyways. “What do you do?”

“Mostly I just sit in the back of the Hawthorne’s car,” I said. “They kidnapped me.”

The first one, Jess, sat up on her elbows to get a better look at me.

“That’s so funny,” said the second.

None of them were laughing.

“It’s so boring,” said Valentina and Caitlin together.

“We feed tonight, but I think we’re going out tomorrow,” Jess said. She grinned, showing off sharp canines. “Leopold says we’ve been so good we can finally go out, as long as it isn’t like last time.”

“It won’t be like last time,” said the second.

“Nothing will be like last time,” the third sighed wistfully which was ominous.

“You should party with us,” Jess said.

“You should totally party with us,” the other two said in unison.

My instinct was to be like nah, I’m good, I prefer living and being alive, but then I remembered that I’m in LA and I have a brand new fake ID just waiting to be tested.

So instead I said, “yeah, that sounds great.”

They slid like liquid off the bed and came towards me, smiling and weirdly fast.

“I hope you have clothes,” said one.

“She can borrow some of ours,” said another.

“She’d look so good in that pink tube top,” said the third. I couldn’t tell which one was Jess anymore.

I was starting to feel like I was being circled by sharks when the door opened again and all three whipped around to see who had come in.

It was Leopold and the Hawthornes.

The triplets grinned and bounded towards Leopold. It was weirdly puppyish.

“Shiloh said she’d come out with us tomorrow,” said one.

“Isn’t that awesome,” said another.

“It’s so awesome,” said the third.

“That’s okay, isn’t it?” said the first and all three of them looked up at him with big, pale eyes. I couldn’t tell if it was funny or terrifying.

Leopold looked up at me. “You really want to go?”

I mean my guts were screaming in rebellion, but these girls were something ELSE man, I was too curious to back down. Plus, I couldn’t let the Hawthornes think I was scared. “Yeah,” I said.

“Wonderful,” Leopold said. “We’ll all go. You can see how the triplets have progressed.” This he aimed at Neal and Julian. 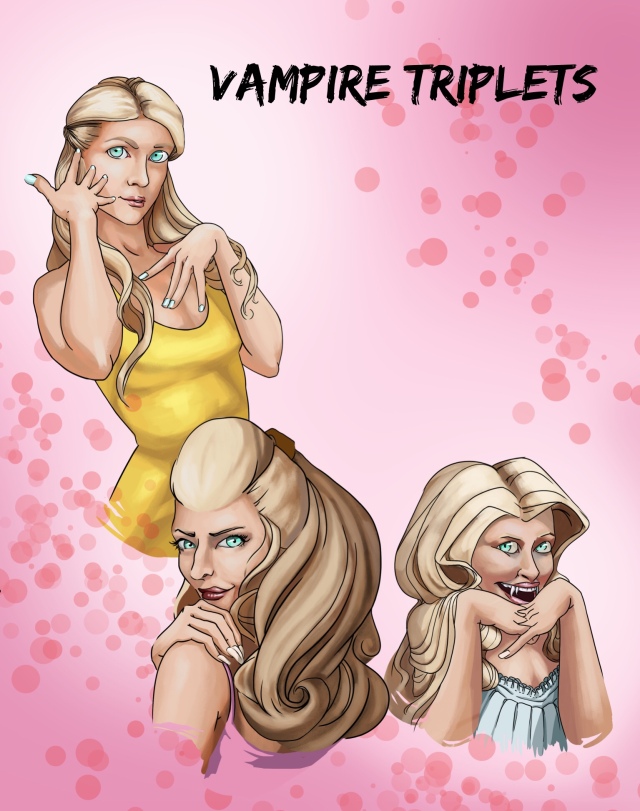